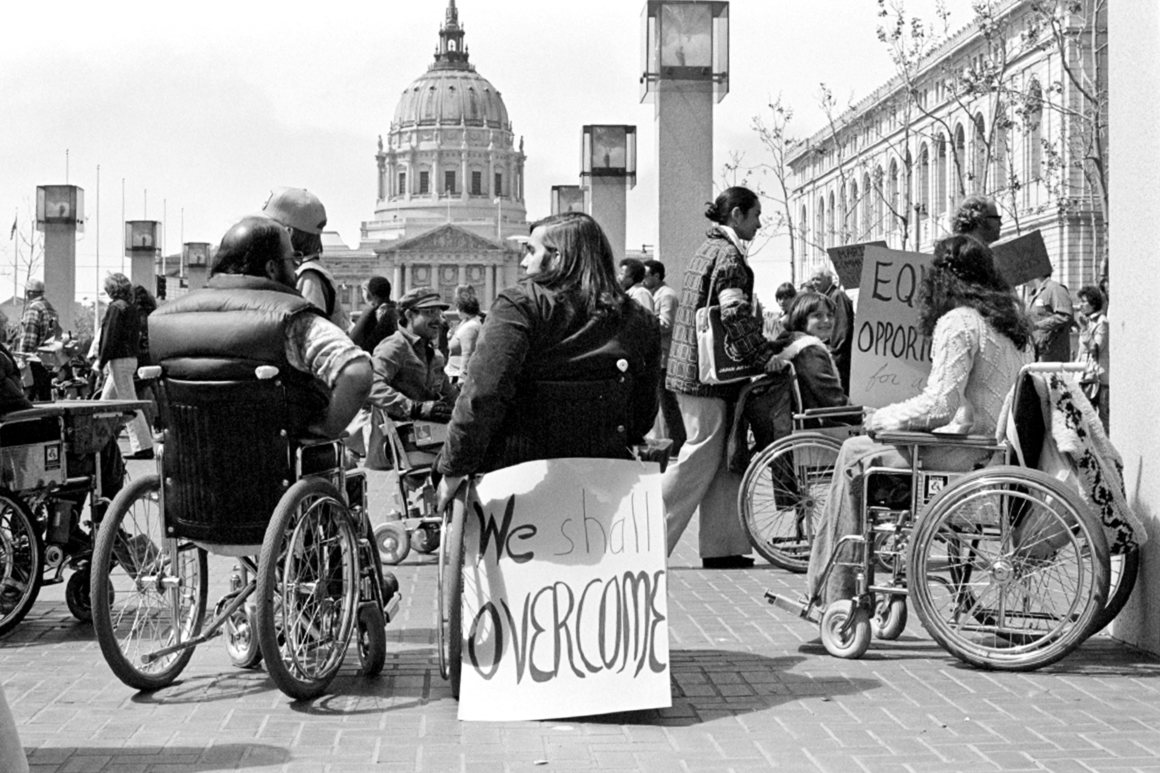 This is not a time of gentleness, of timid beginnings that steal into life with soft apologies and dainty grace. It is a time for loud voiced, open speech and fearless thinking; a time of striving and conscious humanity, a time of all that is robust and vehement and bold; a time radiant with new ideals, new hopes of true democracy.

There are few facets of capitalist society which so thoroughly disgrace and discredit the bourgeois political system as the struggles of disabled people. However, the true causes of these struggles are not immediately clear and are often misunderstood.

Nature imposes limitations on all human beings but these limitations are greater for some than for others. It is through social labor and the development of society’s productive capacities that we achieve freedom from these limitations. The hearing aid, the wheelchair, etc. are all such revolutionary freedoms. Through technological development, new freedoms are made possible against every kind of limitation, from paralysis to blindness.

Capitalism has developed the productive and technological capacities of society to a level previously undreamed of and for the first time has created the possibility for the broad masses of disabled people to access tools that can compensate for their various conditions. Elevators, hearing aids, and electric wheelchairs can all be produced cheaply on a massive scale. However, the bourgeoisie throws up innumerable barriers of access to these things in the interest of profit.

When the technological possibility for liberation from physical handicaps exists but is denied to masses of disabled people for the sake of profits, the limits imposed on the disabled are primarily social, not biological. Hearing aids can give the deaf the ability to hear, but high costs prohibit many people from obtaining them. In such a society it is not a physical problem with their ears which prevent them from hearing, but the fact that capitalists produce hearing aids to make a profit, not to meet people’s needs.

The bourgeoisie does not see the working masses as human beings but as vessels of labor to be exploited. As soon as we no longer serve the bourgeoisie in their quest for profits, they ruthlessly cast us aside. The bourgeoisie sends the working people into wars and dangerous working conditions where we are frequently maimed, traumatized, and permanently disabled. Then we are left to fend for ourselves. When disabled people desire to work, but require reasonable accommodations, the capitalists turn their backs on them because these accommodations could cut into profits. The bourgeoisie cannot even meet modest demands for things such as elevators in subway stations, or a functional Access-A-Ride system.

It is not only the physically disabled who are deprived of the means of overcoming their disabilities. While the bourgeoisie keeps many physically handicapped riders out of the system with inadequate accommodations, it forces the mentally disabled into the system. By depriving thousands of mentally ill homeless people from housing and treatment, it has effectively converted the public transit system into an unsanitary sanitarium, where the most desperate and unwell seek shelter from harsh conditions.

How can disabled people be treated with such neglect and indignity in the midst of such opulence and wealth? Why do private luxury condos equipped with state-of-the-art elevators exist alongside public train stations, which serve thousands more people, without a single functional elevator? Why are there empty homes and homeless people all throughout America? It is because the bourgeoisie imposes its condition of existence upon society as an overriding law: the endless search for profits. The capitalists place a barrier of profitability between the working masses and the goods they themselves produce. It is the masses of workers who build the elevators and manufacture the hearing aids, but it is a tiny capitalist class which appropriates these technological wonders and sells them for its own private enrichment. The struggle for accessibility is a struggle between social production and private appropriation. It is time to crush the artificial barriers the capitalists have thrown up to the social appropriation of social wealth. The struggles for accessibility to public transit and employment are class struggles!

Why Should Transit Workers Support the Demands of the Disabled?

Public transportation is an absolute necessity to the capitalist class, whose representatives in the MTA organize public transit predominantly to serve the needs of capitalists. Capitalists rely on roads and railways to transport their goods to consumers and workers to their jobs. However, the more expensive it is to build and maintain transportation, the more it hurts the profits of the capitalist class as a whole. To keep costs down the political representatives of capital in the MTA exploit transit workers with long hours, little pay, and coerced levels of intensity in work. Even though the MTA is a public authority, the workers who make the public transit system run are every bit as exploited by the capitalist class as workers employed in the private sector. Because capitalist exploitation lies at the heart of both the transit workers’ struggle and the Transit Authority’s refusal to make the system accessible, there is a firm basis of unity between the disabled and transit workers. They must unite their struggles if they are to defeat their common enemy.

The Public Birth of a Militant Disabled Movement: The San Francisco 504 Occupation

There is a rich history of the disabled struggling for autonomy, equality, and respect. One such struggle developed around the 1973 Rehabilitation Act. When the act was written, a legislative aid discretely included a clause in section 504 of the act which read, “No otherwise qualified handicapped individual in the United States shall solely on the basis of his handicap, be excluded from the participation, be denied the benefits of, or be subjected to discrimination under any program or activity receiving federal financial assistance.” This was the first time the language of the Civil Rights movement had been applied to those with disabilities, and it opened an important field of struggle for disability activists. However, for three years the Rehabilitation Act remained only a scrap of paper. It wasn’t enforced in a systematic way and resulted in a proliferation of confused lawsuits with varying results. In response, disability activists demanded that the government pass regulations to provide Section 504 with a systematic framework for enforcement.

On April 9th, 1977, about 150 disabled people stormed a federal Health, Education and Welfare (HEW) building in San Francisco and refused to leave until the 504 regulations were signed into law. Now known as the “San Francisco 504 Occupation,” this protest was part of a series of 10 coordinated sit-ins in government buildings across the country. Most of the sit-ins ended within three days after protesters were starved out. However, the San Francisco occupation lasted nearly a month because the Black Panther Party broke through an FBI blockade to deliver food to the occupiers. The occupation was bolstered by the support and participation of a broad coalition of individuals and organizations, including Ed Roberts, the first wheelchair-bound student to attend UC Berkeley; the Black Panther Party; the Mission Rebels, a San Francisco Chicano organization; various trade unions; the Butterfly Brigade, a gay self defense group, and many others.

The participants understood the need to impose a victory by a show of popular force. Dennis Billups (pictured), a blind Black Panther, called on all Black and disabled people to seize the initiative and join the occupation, exclaiming, “We need to show the government that we can have more force than they can ever deal with!” In addition to the support from the community, it is because of this militant attitude that these fighters maintained their hold of the federal building for 28 days, making it the longest occupation of a federal building in American history. But an enemy such as the bourgeoisie cannot be fought with force alone, even with the most ruthless and thorough-going force. This force must be united with a clearly conceived, firmly established, and farseeing historical perspective in a permanent organization. This is because the bourgeoisie is flexible, and capable of making concessions in order to disperse popular forces. On April 28th, 1977, such a concession was made and the HEW passed the demanded regulations.

Sadly, this victory was short lived. The 504 regulations called for reasonable, phased-in measures to make public transportation accessible, but the American Public Transit Association fought back and eventually overturned the 504 regulations in federal court in 1980. Although these regulations soon proved to be insincere, half-hearted, and illusory, they were nevertheless a remarkable concession, which continues to mark our era. The 504 regulations eventually became the basis for the Americans with Disabilities Act (ADA), the most important piece of disability legislature today. This sequence is a painful reminder that reforms like the ADA and Section 504 can never be serious or thoroughgoing under capitalism.

A Different World is Possible!

Only a revolutionary transformation of society can guarantee genuine equality and freedom for the disabled. Today, the ADA largely remains a paper law, just like the 1974 Rehabilitation Act. It has failed to force public transit agencies like the MTA to make their publicly funded programs accessible to the whole people. Clearly, the bourgeoisie does not even respect its own legality and is always the first to violate it. We must show the same indifference and lack of respect for the bourgeoisie’s laws that it does. We must pick up the struggle of disabled militants like Dennis Billups. Our generation must produce new fighters who are more resolute, bolder, and educated by the struggles of past heroes.

We reject the meaningless good will of politicians and the “pity programs” of Jerry-Lewis-type “philanthropists.” We demand freedom from the constraints imposed on the disabled, not by their bodies, but by the inadequate conditions the bourgeoisie offers them. The capitalist class has demonstrated it is unfit to rule and incompetent to assure an adequate existence to the disabled. By deprioritizing accessibility, the MTA Board of Trustees are in effect saying, “Your bodies are not compatible with the transit system, and you are not compatible with society.” However, it is in fact the bourgeoisie and their inadequate transit system which is not compatible with society!

We believe a different world is possible! A world where disabled people are treated as equal members of society and benefit from social wealth as such. A world where the disabled are permitted to live and not just survive on the arbitrary and paltry “charity” and “benevolence” of the exploiters. A world where common satisfaction of needs, not profit, is the order of the day. We are struggling for a society that meets the needs of the people directly and we call on all who stand for equality and cooperation to join us in this struggle!

We demand access to the transit system for the whole people, with every station made wheelchair compatible in all directions and an expansion of Access-A-Ride.

We demand access to transit jobs for the disabled which are within their powers, including the adaptation of the instruments of labor to their abilities.

OUR PROGRAM FOR REVOLUTION IN THE SPHERE OF PUBLIC TRANSIT

1. Repudiation of the debt, without compensation.

2. Funding of the system through revolutionarily high and direct taxes on the personal wealth of the big bourgeoisie.

5. An end to police terror in the transit system.

7. Ownership of the public transit system by the whole people through socialist revolution.